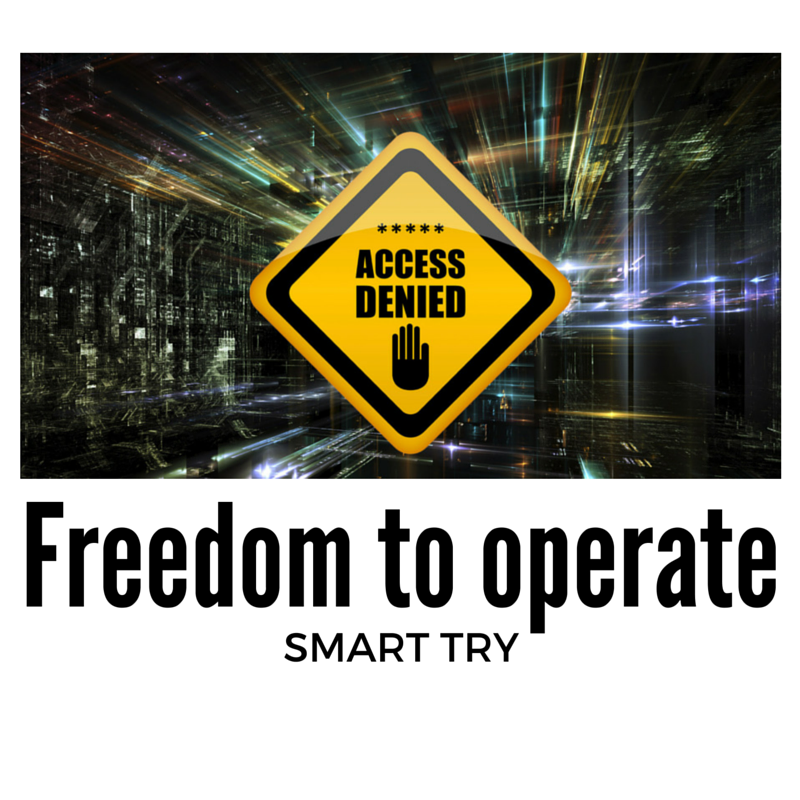 Freedom to operate in the real world

Where exactly is the limit between freedom to operate and prohibited activity?
Identify troublesome patents and operational faults. Assessing the actual risks you have to deal with.

Freedom to operate (or FTO) is the ability to perform a particular commercial activity (e.g. commercialize a product, provide a service, perform a manufacturing process or use a product) without “infringing” 3rd party’s valid IP rights.

Freedom to operate and litigation: a marginal but existing risk.

Filing a patent  is quite “easy”. More than 2.7 million national patent applications are filed annually worldwide (data from WIPO, 2014). Getting it granted is a bit more complicated (just over 1.2 million patents granted in 2014 in the world), but with industrial property advisors, this can be achieved quite well … sometimes at the cost of claims reduced to a trickle (claims are the real basis of the actual protection a patent in force confers). At this stage, if the claims are too light and not in line with the product or process that you will actually sell, the patent will be of little use, even if it is officially granted. However, it will make a good scarecrow for less emboldened competitors, preventing them to step on your toes.

Nevertheless there are more  vindictive actors, a visible minority desperate  to throw up road blocks: those can generally afford their strategy of protection and defend their rights, ready to fight in courts if necessary. In 2006, 1500 to 2000 infringement or invalidity actions would have been recorded worldwide, among which 60 to 70% concern European patents. Legal action is relatively marginal compared to figures about patent applications or grant of patents. However if you are on the wrong side of statistics, such litigation can become very expensive.

The risk is marginal but it does exist. It is in this context that your Industrial Property (IP) advisor urges you to study the freedom to operate related to your product or process, in order to reduce this risk and ensure your right to exploit.

What are we talking about? Freedom to operate or operating right?

Freedom to operate is the art of targeting holes in the racket of IP rights, where no one would be likely to prevent you from developing your business. But within some business areas, you do not have to deal with an airy tennis racket, but rather a full wooden racket (you can opt for table tennis, in my case I rather imagine a beach racket). Ultimately, we can conclude that our freedom to operate is close to zero.

Does that preclude any exploitation?

Going through an army of scarecrows (aka patents) is in itself not difficult or risky so long as the owner of the field (aka Mr. Farmer) is not there waiting for you with a shovel! Therefore it is up to you to measure the risk of presence of Mr. Farmer (not seen, not caught!) … Knowing that the longer you stay in the field, the more chances you have to meet him … So if the lifetime of your activity is short, you should run less risk a priori … unless Mr. Farmer is alert!

It is therefore useful to identify patents compromising your business (even if you do not plan to file one yourself). Among the numerous publications (representing deposits occurred at least 18 months earlier), a first selection is to be made between:

There is in the world in 2014, according to WIPO, more than 8.8 million patents in force (in at least one country).

Considering the remaining troublesome patents, you have then to  consider their owners or operators (licensees).

What tactics to adopt?

The answer to those questions will allow you to detect the actual holes in the racket.

Depending on the answers, you will see if you can:

As a conclusion, it is important to be aware of your freedom to operate in order to take the earliest possible good decisions and to adopt the best strategy to mitigate legal risks.

Nowall innovation can help you to identify patents that you could operate under license.
Do not hesitate to get in touch with us if this process, too often ignored, can be an opportunity for your business!