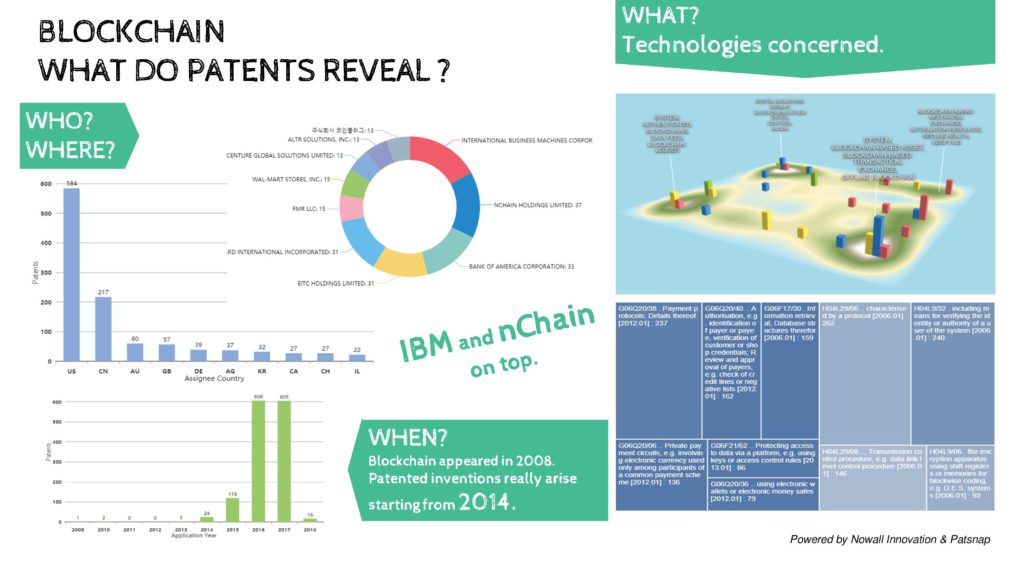 Blockchain : What do patents reveal ?

In this article, we propose an analysis of patent filings around the world on the blockchain theme. An enlightening study!

The blockchain is a technology for storing and transmitting information, which is transparent, secure, and operates in a distributed manner, i.e. without a central control organ. It is the underlying technology of bitcoin. Today many actors (companies but also governments) are considering the use of this technology for other applications than cryptocurrencies.

Speaking of control decentralization, security and transparency, the use of the blockchain can for example apply to the transfer of assets (currencies but also securities, votes, shares, bonds …), to a better traceability of products, or smart contracts, which automatically execute the terms and conditions of a contract without human intervention.

Thus, in the world of innovation, specially in FinTech or AssurTech, the word “blockchain” is almost omnipresent. Initially, the blockchain technology is opensource: everyone can access it, use it as they want, adapt it to their own uses.

One would deduce a little too quickly that no one can appropriate it in a certain way. Yet some players are deploying patenting strategies to obtain exclusive rights to exploit the processes they develop and taht rely on this technology.

Many recent patents are still at the stage of simple patent applications (about 80%), but 15% of the IP rights are already active in the world.

Nowall Innovation, a French innovation consulting company, made a quick review of what is happening in the world’s R&D offices, relying on Patsnap, a powerful patent analysis tool.

Here are some pictures in pictures.

The following graphs show the patented technologies that concern or rely on the blockchain:

We note that the assignees are essentially American and Chinese. Europe follows far behind, and France does not appear in the pack … The top two assignees in the sector are IBM and nChain.

It is also interesting to note that 6 years were necessary for these actors to really take hold of the blockchain technology. Indeed, the first blockchain appeared in 2008 with the bitcoin cryptocurrency, developed by a person with the pseudonym Satoshi Nakamoto. However, patent filings are really multiplying only from 2014 and are booming in 2016 and 2017. It is too early to say yet on 2018!

This demonstrates that the blockchain is increasingly coming to R&D offices around the world and that processes that rely on this technology can be patented.

More worrying, the French and Europeans seem to have missed this shift, at least in the field of industrial property… Aspirants operators must therefore particularly pay attention not to counterfeit solutions that are, or could be patented, because the future is written today, at least in part, in patent filings…